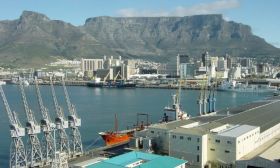 The level of South Africa’s storage dams, which supplies the fruit export industries, are generally much higher now than at any time during the past three years.

This, and a cold, wet winter in most of the deciduous fruit regions, indicate that a good harvest is in the offing.

There are exceptions, where the position of fruit growers is dire and only prolonged good rains will save them in the coming year. These are mostly the areas in the Karoo in the Western Cape as well as the citrus growing regions along the Letaba River below the Tzaneen Dam in the Limpopo Province of South Africa.

The Karoo has had virtually no rain and this will affect the prospects of stonefruit growers, especially in the area near Ladismith where apricots are grown. It can therefore be expected that the country will again see a poor apricot crop.

At Letsitele on the Letaba River, growers now have to face the prospect of setting their new crop for 2020 without any water from the Tzaneen Dam.

Veteran grower Milaan Thalwitzer, of the Komati Group, says that the situation is extremely serious. “When the Tzaneen Dam drops below 10 per cent, which is expected shortly, all supplies to agriculture are suspended. Our group has orchards in various regions and this will cushion us somewhat in terms of our total volumes, but here we have to implement emergency steps to see us through this period.”

Thalwitzer says the long term prospects for rain in the region are fairly good, so it is hoped that the dam level will rise towards the end of the year.

While these growers will continue to suffer, elsewhere in the in South Africa dam levels are now much higher compared with last year.

The Western Cape region’s dams are now in total between 70 and 80 per cent – with a number of dams overflowing. This is delighting Western Cape premier Alan Winde, as well as the province’s Minister of Agriculture Ivan Meyer and other Western Cape cabinet members who met with the agricultural sector yesterday to discuss the successes and challenges they face.

The meeting forms part of a series of engagements Winde and his cabinet will hold with various sectors and role players in the province, which will be taking place over the coming months.

Winde thanked the sector for its resilience and for continuing to invest in agriculture, despite the worst drought in 100 years. "Our economy faces some challenges that are beyond our control such as Brexit, US-China trade relations and issues of land expropriation without compensation. I am pleased that the agriculture sector continued to invest in the Western Cape.

“Seeing continuing investment in agriculture is a sign of its recovery following the drought," he continued. "Creating an enabling environment for the economy to grow is a key focus of this government and a crucial aspect of this is ensuring that agriculture is supported."

Key stakeholders including the fruit and wine sectors raised a number of concerns during the meeting. These included the transformation of the agriculture value chain, drought support, trade and market access and the socio-economic impact of the drought on agriculture.

“The Western Cape contributes 45 per cent to South Africa's agricultural exports. We must therefore nurture, protect and support this sector," he added.