Qatari farmers have boosted local production in response to the blockade from its Arab neighbours, but limited water resources remain a worry 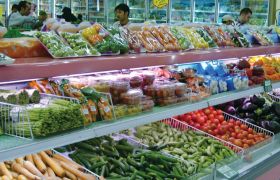 Qatar's response to the political and economic blockade imposed in 2017 by its neighbours on the Arabian Peninsula has seen local agricultural production increase by 400 per cent, according to reports from local news outlets.

Faleh bin Nasser Al Thani, assistant undersecretary for agriculture and fisheries at the Ministry of Municipality and Environment, told Al-Monitor that 40-50 per cent of fresh products could be grown locally within a few years.

However, water remains the greatest obstacle, with Qatar ranked as the most water-stressed country in the world.

Each year, according to Al-Monitor, 92 per cent of the 250m cubic metres of groundwater taken from the country’s aquifers is provided to farmers free of charge. However, nearly four times as much water is withdrawn than is replenished by rainfall every year.

Local authorities reportedly plan to ban the use of groundwater to produce animal fodder by 2025, restricting its use exclusively to vegetables.

Agrico, the Qatari Agricultural Development Company, has invested heavily in state-of-the-art hydroponic facilities that cut water use by up to 90 per cent, developing agricultural facilities for investors committed to sustainable production.

So far, the company has installed 130,000m2 of greenhouses for six customers, with a further 500,000m2 under discussion.

“We have to be environmentally friendly, we have to be sustainable,” said managing director Nasser Ahmed Al Khalaf. “Unfortunately, many of the farms in Qatar are still pumping out water and just flood their fields.”

The Ministry of Municipality and Environment has given its support for moves toward hydroponic farming, allocating a budget of US$2.75m-US$3.3m to provide up to 140 farms with free greenhouses.