A prosperous 2018/19 season for Australia’s horticulture industry sees an increase in nut, fruit and vegetable exports 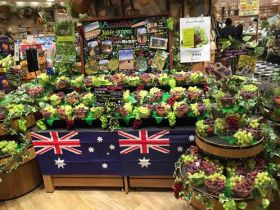