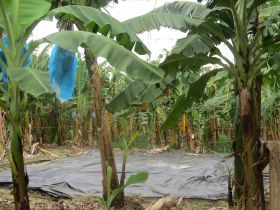 One of the affected plantations in Guajira, northern Colombia (Photo: Ferna

An international research team has provided what is being described as "formal scientific confirmation" that the recent instances of Fusarium wilt, or Panama disease, on two banana plantations in Colombia were the result of the potentially devastating fungal strain Tropical Race 4 (TR4).

The team's findings, which were published as an open-source article in the journal Plant Disease, remove any residual doubts over the cause of the outbreak, not only underline the scale of the challenge facing the Colombian banana industry, but also emphasise the threat posed to banana growers and exporters across the rest of Latin America.

"The publication is the formal scientific confirmation that this devastating strain has reached South America, a region where banana is a very important crop both economically and socially," commented three Dutch companies whose employees contributed to the report – research firm KeyGene, Utrecht University and Wageningen University & Research – in a joint statement.

"TR4 reached the region despite major efforts by governments and the banana community to prevent its dissemination to South America, which underscores its imminent threat not only to Colombia but to the entire region."

The Cavendish banana variety, which represents the vast majority of fresh bananas sold around the world, is especially prone to Panama disease caused by TR4.

"As infested fields disable Cavendish-banana cultivation for decades, measures have been taken to stop or reduce the dissemination of TR4," the report's authors added. "Nevertheless, it has already destroyed thousands of hectares of banana farms across all other continents."

Symptoms of the disease were found in two banana farms in Guajira, northern Colombia, back in June. The total area affected is now said to be 175ha.

Although news of the discovery was soon made public, Colombia's government agricultural institute ICA initially declined to comment when approached for further details.

On 8 August, however, it declared a national emergency after the first laboratory results confirmed the presence of TR4.

Behind the scenes, ICA had already set in motion a series of tests to analyse the affected plants, supported by KeyGene's resident Panama disease expert Fernando García-Bastidas – himself a Colombian by birth – who travelled from the Netherlands to Colombia to begin coordinating diagnostic checks and to collect samples.

The diagnostic analyses involved two different types of DNA test on random samples from suspicious plants: one that has already been on the market for ten years, and another called LAMP.

The results indicated that the farms could be infested with TR4. To confirm these findings, additional tests were carried out in the Netherlands – at Utrecht University, Wageningen University & Research and KeyGene.

Coordinated by Garcia-Bastidas and involving both DNA analyses and pathogenicity measurements, the DNA-sequencing of three isolates confirmed that they belonged to the Fusarium odoratissimum TR4 lineage.

"In the pathogenicity tests, Cavendish plants were screened with these Colombian isolates," explained Garcia-Bastidas. "The strains all caused the characteristic external and internal symptoms of Panama disease."

Plant tissue samples were then taken for diagnostic analyses, which confirmed the presence of TR4 in the affected plant tissue. "Collectively, these analyses provide final proof that TR4 has indeed reached Colombia."