Established three decades ago, the Belgian importer continues to discover new sources and invest in production 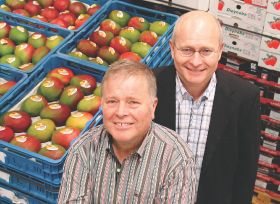 Thirty years ago saw the founding of Belgian importer Special Fruit, seven years after François Maes began importing strawberries from California under the name of Mago Fruit. The latter merged into the newly created Special Fruit Trading, which began serving the European market in 1989 when François’s brother Patrick joined the company.

Thanks to the success of the company, rising employee numbers and growth in the export business, Special Fruit was forced to move to larger premises in the Meer transport zone. At this time, progressive, long storage techniques were starting to keep soft fruit fresh for longer, a key development for the company’s BerryFresh brand.

In the early 2000s, François’s sons, Ben and Tom, joined the company. Ben’s grasp of Spanish helped him to discover the Spanish market, leading to the founding of Special Fruit Spain in 2002, created to coordinate Mediterranean exports, administration, quality and logistics. Tom started in the commercial team, and François’s youngest son, Koen, would later join the company’s business development and marketing department.

The introduction of ripening cells in the 2010s led to the development of the ready-to-eat range for exotic items like mangoes and avocados. The success of this range was one of the reasons for the construction of a new office and 13,500m2 warehouse, officially opened on the occasion of Special Fruit’s 20th anniversary. In 2013, the company’s investment in a high-tech mango sorting machine ensured an even better product was delivered.

In 2011, Delsol Fresh Peru became a partner, acting as an asparagus sourcing hub and logistic office for its South American products. Special Fruit started starting up the Berry Packing Services packing station in the Netherlands, a joint venture with blueberry growers. With the establishment of SF Producciones, more investment was focused on production, packaging and marketing and new varieties in Portugal, Spain and Morocco, such as exclusive raspberry variety Kwanza and Calinda strawberries, while access to the organic berry market came via Mirtisul.

In 2010, the company shaped its vision on sustainability, creating a long-term strategy for Special Fruit and its suppliers, including objectives for the environment, food safety and corporate social responsibility.

“In the future, with the second-generation shareholders that are now at the helm, the company’s sustainability policy will continuously develop,” says corporate identity officer Sarah Hellemans. “In 2019, Special Fruit was awarded the Lean & Green award in recognition of the company’s sustainability efforts. Today and in the future, we want to remain the warm family business where colleagues deal with each other as in a family, distributing products grown by families to be consumed by families.”