Citrus and vegetable production are worst affected, with losses expected to run into tens of millions of euros 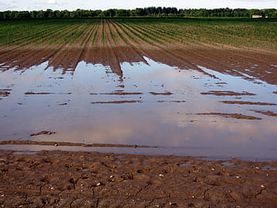 Spanish producers are assessing the damage caused by storm Gloria, which swept through eastern regions this week, flooding coastal areas from Barcelona to Murcia and leaving ten people dead.

Strong winds and heavy rains battered the eastern seaboard on Monday and Tuesday, while hailstorms are also believed to have caused localised damaged in Valencia and other areas.

Citrus is believed to be the worst affected crop, with farms in Valencia, Murcia and, to a lesser extent, Catalonia suffering damage.

Winds of more than 110km per hour has left a lot of fruit on the ground, and Valencian agricultural union Ava-Asaja said many farms have been left under water with fruit for the second half of the campaign still to be harvested and grower fear that fruit rot and fungi will set in if the wet conditions persist.

As for vegetables, cauliflower, broccoli, artichokes and lettuce are among the worst affected crops. The union said that there were many completely flooded fields that would suffer losses of up to 100 per cent of production, while in fields where potatoes and onions had recently been planted, farmers would be forced to replant.

Ava-Asaja noted that while it is still too early to provide an accurate assessment of the extent of the damage, this is likely to run into tens of millions of euros.

Antonio Domene of Almería-based tomato giant Casi said the storm had caused localised damaged to infrastructure and roads in the Campohermoso area in Níjar.

“In the end it seems that around 100ha of our farms have been damaged. There was talk of 500ha, but this has not been corroborated,” he told Fruitnet.

“What is clear is that in the affected areas – which is mainly organic farms – there has been total devastation. Greenhouses have been razed to the ground, and entrances to farms and roads have been cut off. And the crops that haven’t been completely destroyed will surely be affected by the humidity in the coming days.”

On the plus side, the heavy rains have replenished the region’s reservoirs, easing water restrictions.

The Ministry of Agriculture, Fisheries and Food said in a statement on Wednesday that all production losses from Gloria would be covered by the National Agrarian Insurance Plan. This includes losses to next year’s harvest resulting from damage to farms.

With regard to damage to facilities, such as vegetables polytunnels and greenhouses, these are covered provided that the insured has included them in the policy, since they are voluntary subscription.