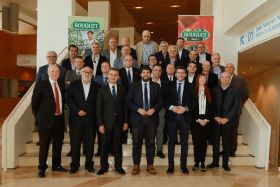 Presenting the results at its AGM on Tuesday, president Alejandro Monzón said the group had managed to continue its growth trajectory in spite of a campaign marred by price crises and the closure of farms due to a loss of profitability, thanks to the strength and professionalism of the cooperativism model.

“On behalf of the nearly 25,000 farmers we represent, we want to show that we are a solid company, which competes with the best guarantees in the international market,” he said. “Together with the effort of our members, we have shown that coordination between small and medium-sized producers allows us to build something big.”

It was a mixed bag for fruit sales, with sales of watermelons reaching record highs (140,000 tonnes) and seeing good prices. Kaki prices also increased following a sharp fall in production due to the climate, while the company’s table grape, topfruit and exotic output continued to grow.

However, citrus and stonefruit prices were hit by overproduction and low prices. In the case of the former, after what Anecoop described as a “convulsive” campaign, the company said it had improved its supply and consolidated its programmes with larger customers. Stonefruit sales grew by 16 per cent in volume, but prices were “very low”.

Vegetables saw the highest growth in turnover (8 per cent) on a 3 per cent decrease in volume. Lettuce, broccoli and sweet potatoes were among the best performing products, with almost all categories, with the exception of tomatoes, seeing a rise in sales.

Sales of organic fruits and vegetables, meanwhile, grew 27 per cent to more than 30,000 tonnes thanks to the incorporation of new products and growers.

Anecoop’s fresh-cut and prepared fruit and vegetable range also continued to grow, both in sales and product offerings, as the company’s Easy by Bouquet brand took its first steps on the international market.

“At Anecoop we are committed to finding solutions and new opportunities to improve grower incomes,” said managing director Joan Mir.

“We recognise the need to make constructive self-criticism and take important steps to improve the competitiveness of the value chain.”

Mir said the group would continue working on the development of product groups for kaki, pomegranate, table grapes, kiwifruit and papayas, and, most recently, had created an avocado group, initially made up of seven cooperative members.

Other important destinations include Poland, Italy, the UK, Sweden and the Czech Republic.