In the first of a series of reports from the frontline, Paco Borrás analyses the industry’s response to the crisis so far 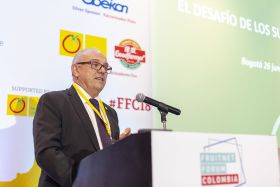 Over the last two weeks, demand for all kinds of fruits and vegetables has been growing day by day. This past week, as the number of infections and deaths associated with the virus has begun to increase – regardless of the fact that almost all of them in Spain were older people and had previous symptoms of other diseases – panic buying has got out of control.

The impact on supermarkets has been much greater than at Christmas or at any other time of the year, with stores breaking their weekly and daily records for each of the past two weeks.

Although anecdotally, the most sought after products have been sellotape, milk and chicken, people have also been buying fruit and vegetables compulsively and at levels well above their needs.

This situation began to spread across Europe early last week and has reached all countries. In Spain, things have already entered a period of normality and we expect to see a fall in sales this week as the accumulation of food in private households will be noticed in terms of real consumption.

Although fruit and vegetable suppliers have not been able to cover 100 per cent of the avalanche of orders they have received, they have come very close. In the last 15 days, they have been dispatching 20-30 per cent more produce than usual for this time of year. The images of empty shelves in produce aisles that have been published during this time have tended to be from late in the afternoon, and by the next day they were well stocked as normal.

During the last two weeks we have worked normally throughout Spain, albeit at a faster rate, without experiencing significant personnel problems both in the field and in packhouses.

The situation has been helped in large measure by the fact that 95 per cent of the fruit and vegetables bound for Europe comes from the regions of Valencia, Murcia and Andalusia, which to date represent just 12 per cent of the total number of infected people.

We did, however, experience logistical problems with the containers destined for Asia, although not for those heading for the Middle East of the Americas. But it’s worth bearing in mind that for most of our products, Europe (including Spain) makes up 96 per cent of our market. We also saw some problems last week with the transportation of products within Europe due to queues at the borders of Italy, Austria, the Czech Republic and Slovakia.

Since the Spanish government declared a state of emergency on Saturday night, a series of internal and external factors have converged to affect the supply of fruits and vegetables. Restrictions on the movement of people have been tightened, and although field and packhouse workers are still allowed to go to work, we fear that numbers will begin to fall because of the need to care for children.

To date we’re not aware of any packhouse employees testing positive for coronavirus, but if this were to happen it could make the problem more acute.

Moreover, we expect to see more reluctance from people employed in packhouses to go into work due to the fear of becoming infected as they work in close proximity to their colleagues.

Warehouses are restricting the entry of unnecessary personnel and enforcing distancing measures between employees. Some are preparing to organise the day into two shifts with fewer staff on each in order to minimise the risk of infection.
The above measures mean the sector is already having to bear some additional costs, which will directly and progressively affect the productivity of harvesting and packaging operations.

Another issue worth pointing out is that as major industries become paralysed and haulage companies start to see a drop off in demand, fewer and fewer trucks are returning to Spain and they will therefore have to transfer the additional costs to fruit and vegetable companies.

At the beginning of this crisis, we saw a spike in demand as retailers responded to the panic buying in a somewhat exaggerated way. But little by little, they are coming to realise that this is a long war and that we all have to work together.

At the same time, some wholesalers are sourcing more products from overseas, but they are slowly coming to realise that this is a global crisis, and restrictions on the movement of people will be enforced almost everywhere.

Naturally, in such a fluid and rapidly changing situation it is difficult to foresee how things will evolve in the medium term.

What is beyond doubt, however, is that people in Spain are beginning to appreciate the value of having a robust fruit and vegetable industry that has so far been able to respond to the surge in demand with little tension.

If Europeans learn to value this as well, something positive will come out of this terrible situation.

Paco Borrás, chairman of the Export Committee at Freshfel and former commercial director of Anecoop, analyses the impact of the coronavirus outbreak on Spain’s fruit and vegetable industry.