A hotbed of agri-tech innovation, New Zealand’s Robotics Plus is busy bringing its machines to the global market, with topfruit stalwart Adrian Scripps the first UK business to benefit 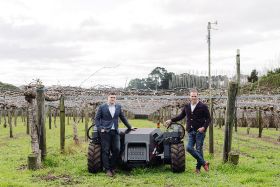 Having just been named in the Thrive Top 50 list of global agri-tech companies, New Zealand-based Robotics Plus has every reason to feel chuffed with its achievements. But the company remains grounded in its core service: helping tackle global labour shortages in the fresh produce industry, not to mention numerous other big challenges facing the sector.

“Worker shortage is a major hurdle for major orchardists in New Zealand, as it is globally. Ageing population, ageing farmers and people not wanting to do hard labour is behind the shortage,” says Dr Matt Glenn, CEO of Robotics Plus. “Our R&D efforts focus on solving the growing challenges in agriculture and related industries globally such as labour shortages, sustainability for growers and producers, pollination gaps and yield security.”

The tech firm has a portfolio of products, including a robotic kiwi picker, automatic log scaler, and a kiwi pollinator. But most promising for European fresh produce is its automatic apple packer, and a fleet of unmanned ground vehicles (UGVs), one of which looks like it would do well against the Batmobile.

“Apples are some of the most widely consumed fresh produce globally. Even with advanced automation within packhouses, most producers still rely on seasonal labour to pack apples into their final packaging. Finding seasonal labour is getting harder, which is constraining this industry globally,” Glenn adds.

Cue Robotics Plus’ Aporo apple packer, which can put away 120 apples per minute, the same as two people, and is capable of operating 24 hour days, of course, “with better fruit presentation and softer handling”, according to Glenn. The machine utilises suction arms to transfer pre-sorted apples onto trays.

“Dynamic recognition of apple orientation or trays was a big step forward within the industry,” reflects Glenn. “Robotics Plus developed its own robot with a pick-and-place head to deliver the required motion control to enable high throughput and commercial success.”

The machine has quickly moved to commercial phase, with the UK getting its first Aporo packers this Christmas. “Packhouses in New Zealand, Europe and the US have installed the technology, which is sold by Global Pac Technologies, a joint venture between New Zealand’s Jenkins Group Limited and US based Van Doren Sales Inc, which has the license to distribute the Aporo technology in key global markets.

“In December it was announced that UK heavyweights Adrian Scripps and Prime Produce will be the first two installations in the UK market – an important market as the UK apple sector produces an estimated 220,000 tonnes annually.”

Its unmanned vehicle project is also on the verge of going commercial. “Robotics Plus is developing its unmanned ground vehicle (UGV) to complete a range of different horticultural tasks in orchards such as spraying, fertilising, pollination, crop estimation and harvesting.  The platform technology represents a big opportunity for the company and it plans to commercially launch its first UGV later this year.”

With a top ranking, and a host of commercial technologies coming to market, it’s surely easy sailing for Robotics Plus from here on? Not exactly. Developing these machines is a costly venture, and one of the key challenges companies like Robotics Plus face is finding the backers who believe in their technology.

“Robotics Plus spends several million dollars a year on R&D,” says Glenn, who will rest easier after the company recently received US US$10 million investment from Yamaha Motor Company.

The company also benefits from a tight-knit agricultural scene which has had to cut its teeth the hard way after New Zealand famously pulled agricultural subsidies in the 1980s under the “Rogernomics” policies of then finance minister Roger Douglas.

“The company has also received grants to assist with innovation and growth from New Zealand Government organisations including Callaghan Innovation, New Zealand Trade and Enterprise and the Ministry for Business and Innovation. Robotics Plus’ efforts are well supported by a number of collaborative research relationships with universities and research groups” Glenn adds.