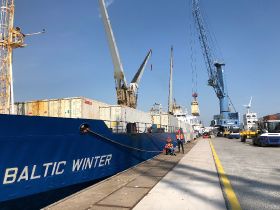 Dutch forwarding and logistics specialist Kloosterboer has revealed that the cargo vessel Baltic Winter discharged the season's first shipment of Argentine lemons at Vlissingen on 8 May.

The first shipment in a series of eight, the Baltic Winter's lemons are destined for distribution across the European market, Kloosterboer outlined.

According to schedule, a vessel is expected every two weeks until August/mid-September.

Commercial manager Joost Heere said that he expected the supply to be higher, with the market still very strong in Europe and, due to a good harvest, volumes still available.

Heere said that the large volumes expected in the coming period – on average almost 4,000 pallets per call for the first four arrivals, and some even at 5,000 pallets including container capacity – were "striking".

The causes for conventional shipments are not only the large supply and strong market, he explained, but also the lack of reefer containers.

This would mean a double loss for container shipping companies, because they are not getting reefers available for export in Europe either.

The same volume trends are also being seen in South Africa for the upcoming citrus season, for similar reasons.

"There we also see a high forecast at Kloosterboer Cool Port Rotterdam," Heere added. "We are ready to start the season at both locations."