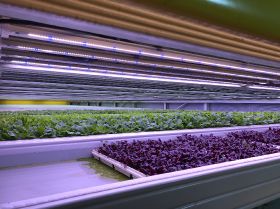 The facility, which has approximately 3,000m2 of growing space, has a daily output capacity of up to 550kg of salad, herbs, and cresses.

The farm is the result of a joint venture between &ever and Kuwait’s Nox Management, which focuses on the food and beverage sector in the GCC and is part of the IFA group.

Kuwait, a country that has relied on European and overseas imports for most of its greens and herbs, can now locally grow up to 250 varieties of greens and herbs using &ever’s Dryponics technology.

&ever produces high-quality and sustainable crops indoors which the group said increases the nutritional quality of the produce and decrease environmental impact.

"Normally, green leaves lose most of their nutritional value after being washed in chlorine, chilled, packed, stored in warehouses, and then sent on the road for transportation – many times across thousands of kilometres," the group stated. "Even traditional organic labeled foods can contain pesticides.

"What sets &ever apart from its competitors is its revolutionary farm design. It aims at being the most energy-efficient indoor vertical farm and hence the most environmentally friendly. Key levers are the use of insulated climatised rooms, a high degree of automation, and an AI-based continuous improvement cycle.

Building on the global deployment capabilities of its key partners, &ever said that it would scale its operations quickly and globally.

“Our vision is to bring better tasting greens with high nutritional value to more and more people”, says Mark Korzilius, founder of &ever.

“We have an interesting pipeline of opportunities around the globe,” added Dr Henner Schwarz, chief executive of &ever. “We hope to be able to travel internationally again soon to get our next farms live as quickly as possible.”