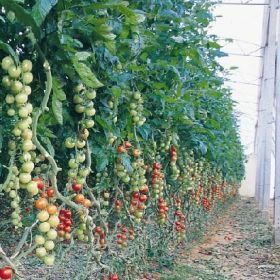 Speculation is rife as to what the new normalisation of relations between the UAE and Israel might mean for trade after the UAE recently became the third Arab country to recognise Israel after Egypt and Jordan.

When it comes to fresh produce, it’s probably best to look at what sort of cooperation has already been established between the countries prior to last week’s agreement.

According to the Times of Israel, investment firm Arieli Capital, which operates innovation centres in Israel and across the world, as well as a regional council in Israel’s Negev desert, has been in talks with officials in the UAE for some time in order to promote desert agriculture projects.

Several meetings on the subject have reportedly taken place in Europe between UAE representatives and Eran Doron, head of the Ramat Negev Regional Council, and representatives from the Centre for Experimental Desert Agriculture in Ramat Negev.

“Technology and innovation will become the bridge that connects the Israeli and UAE ecosystems and communities,” said Eric Bentov of Arieli Capital. “The discussions are a game-changing opportunity to unlock the social and economic potential of the Middle Eastern countries.”

Or Haviv, another partner at Arieli Capital, told the newspaper that UAE officials were considering sending teams to Ramat Negev for training in innovative desert agriculture in order to be able to grow crops such as strawberries, blueberries and tomatoes and cut back on imports.

Ramat Negev is renowned for its agricultural know-how, built up over the past 50 years at the Centre for Experimental Desert Agriculture, with research projects looking into efficient water usage and irrigation, soil diseases and pests, new product development and the acclimatisation of existing products, and the development of agricultural techniques to improve the profitability of crops.

In May, Arieli Capital joined forces with the Ramat Negev Industries and the regional council to establish an agritech innovation centre in southern Israel, with the aim of expanding the economic potential of the region’s agricultural sector and R&D capabilities.