Market conditions appear just right for the start of the French topfruit season, but concerns about the climate, Covid-19 and Brexit persist 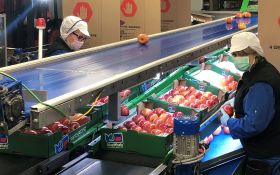 "With the topfruit market relatively empty, demand is high, so the prospects look good," said Peyres. “When it comes to Covid-19, we don’t know if we will have similar outbreaks in September and October to those we saw earlier this year. This will cause consumption to rise, so it’s hard to know the balance. Logistics weren’t an issue in Europe due to our modern facilities for distribution. The effect of the resulting economic crisis might be more significant, including fluctuations in exchange rates.”

The economic situation is unpredictable, said Peyres, including on overseas markets. "In Asia, every market is different," he said, "but in general, apples are quite an expensive product in the region, so we could see imports to this market fall."

India reportedly started early for Blue Whale this year due to a lack of product, with the market performing well. "We had a good season in India with Southern Hemisphere fruit," said Peyres. "India is a huge market, so even a small increase in demand creates a big result. We will see how long this lasts, as there is always a lot of variability."