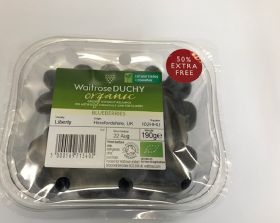 “Our organics provide high-quality berries using methods that deliver a breadth of benefits across the whole food system," said Angus Davison, chairman of Haygrove, which has grown the premium range. "We’ve applied our significant school fees learning how to produce organic strawberries and raspberries, into growing Waitrose’s first UK organic blueberries and we look forward to new consumers enjoying them.”

“As leaders in producing innovative berries of exceptional quality, we are proud to be the first in the UK to bring to market best-in-class, home-grown organic blueberries to Waitrose at a time when nutrition and health is a focus for all of us," noted Berry Gardens chief executive Nick Allen.

“With the health benefits of blueberries already well publicised and consumer demand for British and organic berries at an all-time-high, people across the country will be able to enjoy nutritious organically grown British blueberries of the highest quality at their peak," he added.