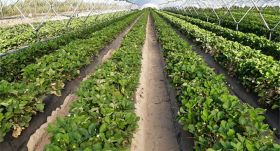 A new biostimulant developed by Spanish company Valagro has been shown to significantly reduce water consumption in strawberry crops.

During tests carried out in the province of Huelva in April and May of this year, the application of Talete to Inspire and Victoria plants improved the plants’ ability to absorb and retain water.

“In the first test, we saw a reduction in water consumption of 25-30 per cent, without losing production, which was the same as that of the untreated areas,” said SP Soluciones Agrícolas, the company that carried out the tests.

“Moreover, the lower foliar mass in the area treated with Talete facilitated the strawberry harvest, a job that could be done faster and, therefore, with less labour.”

In both cases, 5 litres of Talete was applied every 15 days, up to a total of 20 litres.