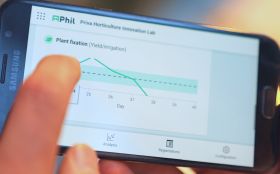 “Plantonomy is not a trial or a challenge,” explained Meiny Prins, CEO of Priva. “The application is already cultivating many hectares autonomously within large production greenhouses in Mexico, the UK, the Netherlands, the US and Australia.”

Anomalies in the crop are apparently detected automatically. “Comparing crops by variety, greenhouse and geographic locations is becoming reality,” the company stated. "And the best thing is, growers don’t need to make investments to get started. All they need is a subscription."

"If we want to get people into this industry - the younger generation - we cannot expect for them to work seven days a week, 24/7, as I did when I was a grower, and as my father did probably," he said. "The new generations will demand something different. They want some free time. We are now able to put Plantonomy inside our systems, and we can say to the grower, if you’re going on holiday for the next two weeks, the programme will guide you and help you so that the production of your greenhouse facility will continue. Now, for the first time within our industry, you are able to go on your honeymoon, you are able to go on holiday with your friends, and still keep the operation running."

Kester said that crop managers would still be needed in the greenhouse, but would have a much simpler job. "It’s a team effort," he said. "What we did was allow the crop managers to still be in charge of the greenhouse. But that same person does not need to change the 60,000 settings if they want to adjust something. They can now do it with a simple push of a button, and the computer system will do the rest."

Francois Habasque, head grower at RedSun Farms in Mexico, where Priva's Open Platform is currently in use, said that one of the main advantages of the system was stability. "And if we get stable management of the crop over the day, the week, and the month, we will achieve better yields," he concluded.