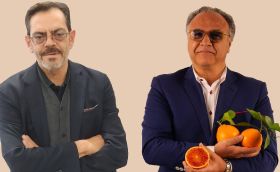 Unifrutti Group, one of the world’s leading fresh fruit suppliers, has expanded its commercial portfolio with the acquisition of Oranfrizer, Sicily’s biggest fresh citrus supplier and a key supplier of premium, speciality varieties.

The deal, which was signed on 28 October by Unifrutti chief executive Marco Venturelli and his counterpart at Oranfrizer, Sebastiano Alba, marks a major step forward for both entities.

First and foremost, it offers Unifrutti an opportunity to strengthen its role in the citrus market. It also provides family-run company Oranfrizer with fresh investment as well as an expanded sales network that promises to help it grow further on the international stage.

For Unifrutti, the acquisition is seen as an opportunity to expand its product portfolio with the addition of some new and  highly distinctive orange cultivars – notable among them blood oranges grown in the area around Catania.

“Oranfrizer represents an important step in our continued growth and adds an internationally recognised asset to our portfolio,” commented Venturelli, who also confirmed that the deal had been supported by The Carlyle Group, an investor with which Unifrutti has been working since 2019.

“This transaction is a key component of our global buy-and-build strategy through which we plan to seize additional attractive opportunities to grow and increase profitability, as well as create value for all stakeholders.“

He added: “Unifrutti Group sees opportunity to consolidate our global leadership position in the high-quality fresh fruit sector and we are continuing to develop our presence in most international markets with a focus on rapidly expanding markets in Europe, China and Japan.”

Alba, who retains his position as CEO of Oranfrizer, said his family was “honoured” to have joined the Unifrutti Group. “Unifrutti and Oranfrizer share the common goal of overseeing the segment of quality production, processes and products, with particular attention to the issues of environmental sustainability,” he said.

Founded around 60 years ago with the goal of marketing Sicilian citrus and eventually other fruits and vegetables, Oranfrizer’s task would now be to maintain and grow its reputation both in Italy and abroad, he said.

“Thanks to this agreement, our blood orange, already one of the most recognised excellences of Italian fruit production, will be able to more easily reach new destinations and strengthen its presence in the countries where it has already been introduced To grow abroad, and in Italy of course, we will strengthen our entire production chain.”

As a group of companies owned by the Alba family, today Oranfrizer operates Sicily’s largest orange supply chain, consisting of Oranfrizer, beverage spin-off Oranfrizer Juice and the Carmito farm, which has 160ha of citrus groves.

Carmito itself belongs to the producer organisation Terre e Sole di Sicilia, which brings together 148 producers and approximately 1,400ha of production – the vast majority of which were recently converted to new combinations of graft and rootstock as a means of both overcoming a virus called Tristeza and introducing new Tarocco orange cultivars.

The group boats a solid commercial presence in the Italian market, as well as in key export markets the UK and Scandinavia. Its combined turnover for 2020, including revenue from Oranfrizer Juice, is reportedly on track to exceed €55m.

Unifrutti Group, meanwhile, stands out as one of the leading global players in the fresh fruit market, with consolidated turnover reported at almost €700m.

Supplying more than 500 customers in around 50 countries, it operates a vertically integrated business model that includes production (it owns 59 of the 93 farms from which it sources), marketing and distribution of about 550,000 tonnes of fresh fruit each year.

Among others, its target countries for export, in addition to many in Europe, are Japan, China, India and Saudi Arabia.

It also operates packhouses in a number of locations, including Japan, Italy, Turkey, the Middle East, China and India.