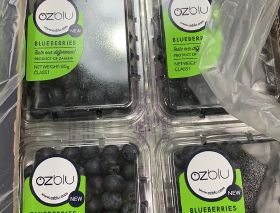 "Market access is a critical ingredient in the success of African enterprises," said the United Exports Group, Australian company and OZblu licence-holder. "Although the Northern Hemisphere still dominates global berry production, South American producers and exporters have experienced a meteoric rise largely thanks to their access to key markets including the United States of America, the United Kingdom, Europe and China."

"There is therefore so much potential for Southern Africa to take up a place to compete with South America on the global blueberry stage," United Exports said.

“We are extremely excited about this new opportunity to access one of the largest markets in the world," said Graham Rae, managing director of the Zambezi Berry Company. "We are confident that, by maintaining our world-class quality with these World-leading OZblu varieties while significantly increasing quantity, we can successfully compete with some of the biggest global producers.”

"United Exports is proud to be a part of this innovative venture, and expects this marvellous achievement for Zambia to be the first of many celebrations as Africa gains ground in the international blueberry market," the company concluded.