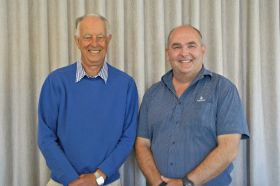 The Sustainability Initiative of South Africa (SIZA) has announced that it is bidding farewell to Nigel Mudge, the long-standing and first official chairman of its board of directors.

According to SIZA Mudge served on the SIZA board for four years, and has been "instrumental in the establishment and growth of SIZA towards a stable and effective service entity".

Mudge has indicated that he wishes to retire, and SIZA wished him "a wonderful future with lots of time to enjoy with his family, friends and hobbies".

As a result, SIZA has also revealed that Nicholas Dicey has unanimously been elected as Mudge's successor.

"Nicholas is well equipped for the task and we are confident that he will be a more than capable successor to this key position," SIZA stated.

"Over the last two decades, due to the wealth of knowledge he obtained from traveling to and engaging with global trade, Nicholas has been an immeasurable asset to the various industry organisations and boards on which he has served and will continue to serve. His practical experience gained from farming on the family farm, which is over a century old, has also provided valuable insight to his endeavours."

Dicey also represents South Africa on the World Apple and Pear Association (WAPA), and in 2019 he was elected as the president of WAPA.