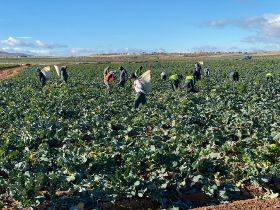 Horticultural workers in Murcia largely defied a strike called by two unions in the region on Friday.

But grower-exporter association Proexport said 97 per cent of field and packhouse workers in its 56 associated companies turned up for work today.

Director Fernando Gómez said the strike had been “a historic failure”.

“The companies associated with Proexport continue to work normally during the strike called today by CCOO and UGT in the Murcian countryside, with the aim of continuing to ensure the supply of fruit and vegetables for the chain food so that this weekend and holidays there is enough product in supermarkets and greengrocers throughout Europe,” he said.

Gómez noted that the strike had not been supported by the Redes, Iniciativas Sindicales Agrarias and USO unions, which also have representation in agricultural companies.

“I would invite the union leaders and their industry federations to reflect deeply on their constant attacks on the sector in recent months,” Gómez continued.

“Our member companies and cooperatives strive to do things well, we are not like the minority of operators in the underground economy thta do not represent the regional agricultural sector.

“It is time to demand more respect, more peace and invite to resume the dialogue for coexistence, social peace and the maintenance of thousands of decent jobs.”