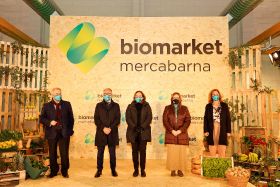 Mercabarna’s Biomarket, the first wholesale market for fresh organic food in Spain and the biggest organic fruit and vegetable market in Europe, was officially opened by the Mayor of Barcelona, Ada Colau on Wednesday.

The market was built to satisfy growing demand for organic food among the citizens of Catalonia, as well as to support the city's commitment to a fairer, healthier and more sustainable food model, which will take place in 2021, the year in which Barcelona will become the World Capital of Sustainable Food.

“Biomarket will help local and organic foods stop being a luxury and become more accessible the public, through municipal markets, retail stores and restaurants,” Colau said. Sempere noted that “consumers are emerging from the health crisis with a much better understanding of healthy and sustainable eating”.

The new €5m market covers an area of ​​8,900m2 (including the trailer loading and unloading area). The building has been designed to reduce energy consumption as much as possible, using renewable energy sources and passive air conditioning elements.

It will supply regional shops and foodservice businesses

“Grouping the wholesale companies that sell these foods in the same place will encourage greater competition between them, leading to a more varied offer and the best value for money for citizens,” Mercabarna said.

“By concentrating the supply of organic products in this way we also give them greater visibility.

Housing organic suppliers under one roof also makes it easier to enforce organic safety standards and the labelling and certification of such products.

The market is also home to a division of the Catalan Council for Organic Agricultural Production, whose function is to audit and certify the companies that market organic agri-food products in Catalonia.

The Biomarket sells mainly fruits and vegetables, but there are also multi-product outlets supplying products such as cereals, oils, packaging, eggs and drinks.

The Biomarket is one of the projects developed to celebrate Barcelona being named World Capital of Sustainable Food in 2021, reflecting its commitment to promoting a healthier and more environmentally friendly diet that promotes local agriculture and commerce.

Accounting for just 1.69 per cent of the total value of the average food shopping basket, organic sales are relatively low in Spain compared to other European countries. Nevertheless it is one of the countries with the highest growth, with sales increasing by 13 per cent last year.