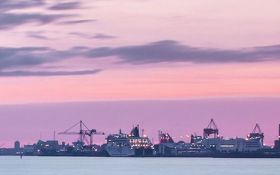 British goods have been prevented from entering Dublin Port

The Freight Transport Association of Ireland has warned UK businesses to ensure any goods sent to the Republic of Ireland are accompanied by the correct declarations paperwork or they will face potential delays on arrival at Dublin and other Irish ports.

In the first week of the new trading relationship between the UK and Ireland, several loads bound for Dublin have been prevented from entering the country due to missing or incorrectly completed paperwork.

Traffic flows are still building after the festive break, but FTA Ireland warned that once numbers reach normal capacity, the failure to follow new processes will cause delays, impact on trading conditions and put the Irish supply chain at risk.

Aidan Flynn, the association’s general manager, said: “No one wants vehicles and drivers to be stuck in port for hours on end. It is up to shippers and hauliers to work together to complete all customs, safety and security declarations and pre-boarding notifications in advance of moving to ports.”

He added: “We are all facing new trading arrangements for the first time in 40 years, and that situation poses issues for all of us. To ensure that goods continue to flow smoothly to and from the Republic, everyone in the supply chain must work together and allocate clear roles and responsibilities.”

Irish Customs has made a helpline available so companies can check that new processes have been followed correctly.

FPJ has also heard reports of importers in Ireland withdrawing and cancelling orders of English produce due to the considerable cost of preparing the new paperwork that is required.

“English produce growers who normally export to the Republic of Ireland are working on an average of €250 in additional cost per consignment,” said wholesale expert Vernon Mascarenhas of Nature’s Choice. “Some Irish importers are withdrawing and cancelling orders, weighing up that it takes longer but it’s cheaper to import from Europe.”

Among the fresh produce items being affected are UK-grown salads, beetroot and microgreens, according to Mascarenhas.

In both the UK and Ireland, wholesale prices on a range of produce are reported to have rocketed as a result of the additional paperwork costs. However, foodservice orders have sunk further following the start of a new national lockdown in Britain, and the introduction of strict new lockdown measures in the Republic of Ireland.

At retail there has been supply disruption in Northern Ireland, with the BBC reporting that Sainsbury's has been temporarily stocking Spar-branded producs. The retailer signed a contract with Henderson Group, one of Northern Ireland's leading food wholesalers, which supplies retailers and caterers.

According to the BBC, around 70 Spar-branded products are currently available from Sainsbury's stores or online in Northern Ireland.

A spokesperson for the supermarket said: "A small number of our products are temporarily unavailable for our customers in Northern Ireland while border arrangements are confirmed.

'We were prepared for this and so our customers will find a wide range of alternative products in our stores in the meantime, and we are working hard to get back to our full usual range soon."