A majority of French shoppers want to see more compostable packaging instead of plastic and are willing pay more for it, according to a survey 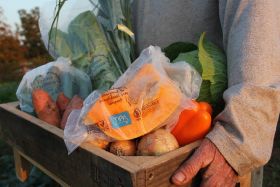 A recent survey of French consumers shows the growing appetite for compostable packaging in the country, according to packaging company TIPA.

The coming weeks will be key for the packaging and waste management sectors in France, TIPA stated, as the circular economy law enters its final stage and the European Commission prepares to adopt guidelines on what exactly should be covered by the single-use plastic ban.

“These results show that French people are ready – and have already started – to change their habits in terms of waste management," said Daphna Nissenbaum, co-founder of TIPA. "In fact, maybe French people are even more ready than their British neighbours."

In a similar study carried out by TIPA in the UK in July, 69 per cent of UK consumers thought more food should be packed in compostable packaging, compared with 89 per cent in France.

"Also French people are even more willing than the British to pay more for food products wrapped in compostable packaging," she continued. "Those results also confirmed to us that the French public is looking for sustainable solutions, and only for necessary packaging.

On the question of the performance of the big brands in offering alternatives to plastic packaging, respondents gave an average score of 4 out of 10.