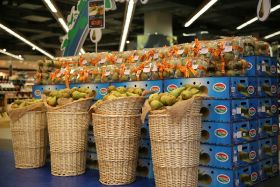 The Indian ruling is due to come into force on 1 March and stipulates that certain fresh produce imports, including apples, beans, eggplants, melons, plums, sweet peppers and tomatoes, carry non-GM certification. However, none of the targeted products are authorised for GM production in the EU, making the requirement "irrelevant and burdensome", Freshfel said.

In a letter sent yesterday (19 January) to Dombroski, Freshfel Europe expressed its "deep concerns" about the new India ruling, adopted on 21 August 2020, that will, it says, generate unnecessary red tape and additional costs for EU exporters to this growing market.

The Indian order on non-GM certification was due to come into force on 1 January 2021, but the European Commission negotiated a two-month delay to allow EU exporters to prepare for the new measures.

Commenting on teh impending requirement, Freshfel Europe general delegate Philippe Binard said: “While initially welcoming the postponement of the measures, it is important that a practical solution is found by the new implementation date of 1 March.

"None of the products listed in the order have been part of a process of genetic modification authorisation in the EU. With no progress on the clarification of the order, EU exporters are facing the same uncertainties for upcoming shipments due to arrive in India after the 1 March as last year. This month is usually one of the peak export months with more than 20,000 tonnes in 2019."

Last year, the lack of clarity around the Indian ruling disrupted preparations to the start of the European export season, which usually peaks between January and April, Freshfel said.

"Operators’ export planning was impacted by shipping time to India, uncertainty on when the rule would apply and possible implementation parameters of the order in the EU, such as which member state authorities would take charge of the potential certification," Binard said. "With continued uncertainty, these elements continue to lead to an unequal playing field among European exporters into 2021."

Binard added: “Freshfel Europe is urging the European Union to urgently clarify the situation. Freshfel Europe fully supports EU fresh produce exports and the EU’s proposal to substitute an individual certification system by a general EU declaration based on the guarantee provided by the EU GMO legal framework."

Freshfel Europe is hoping that on-going negotiations, especially a scheduled meeting between EU and Indian representatives on 22 January, can provide the platform for a breakthrough in finding a practical solution.

Freshfel Europe director for trade Natalia Santos said: “An unnecessary administrative workload for EU member states and Indian authorities, as well as a huge needless burden for fruit and vegetables business, will be created if each consignment needs to beindividually certified.”

Freshfel Europe believes that a prompt and satisfactory long-term solution will allow business to continue and grow in confidence, and provide a favorable environment for the EU fresh produce export growth to the strategic Indian market without any additional unnecessary requirements.

Santos concluded: “We are confident that the guarantee of the robust EU legislation on GMOs, traceability, and the absence of authorisation for GMO EU fruit and vegetables production will provide the necessary guarantee to the Indian authorities to exempt the European fruit and vegetables listed in the Order from this GM-free certification requirement."

In the last few years, European export of fresh fruit and vegetables to India has experienced significant growth, with a peak in 2019 of almost 100,000 tonnes worth €82.5 million.