Italy set for increase in planted area, while acreage in Spain, France and Portugal remains stable 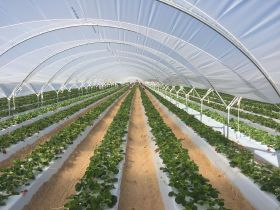 Italy expects a 9 per cent increase in strawberry acreage in 2021, while Spanish acreage is set to contract by around 2 per cent.

The forecasts were presented at a meeting of the European Union’s Spanish-French-Italian-Portuguese strawberry contact group this week.

Xavier Mas, head of Fraise de France, which brings together around 50 per cent of France’s strawberry production, said national production and planted area had remained stable over the last five years, with a total of 3,299ha planted in 2020 yielding a crop of 57,683 tonnes.

Mas noted that although demand dipped at the beginning of the country’s lockdown, a national campaign encouraging consumers to buy French-grown strawberries had a positive impact on demand, reinforced by the fact that there were fewer imported strawberries available between March and May.

Pietro Ciardiello, from the OI Ortofruttailtalia, said Italy’s acreage is set to reach 3,962ha, a 9 per cent increase on last season, mainly due to additional plantings in the south.

Unlike Spain, where the bulk of the production is located in Huelva, Italian strawberries are grown throughout the country, although the regions of Basilicata and Campania together account for 50 per cent of plantings.

A large part of Italy’s crop goes for domestic consumption. Last year exports totalled 10,672 tonnes, a fall of 17 per cent on the previous year.

According to figures presented by Rafael Domínguez of Freshuelva, Spain’s strawberry acreage has contracted by 2 per cent in 2021 to 6,105ha.

He noted that there was a greater varietal diversity this year, with a move towards early varieties that allowed Spain to bring its commercial window forwards.

Domínguez said 2020 had been a complicated campaign due to the repercussions of Covid-19, with production volumes falling by 20 per cent overall.

All of the representatives voiced concerns about increasing variations in national laws regarding the permitted use of active ingredients and phytosanitary products. They called for a single set of regulations covering all EU member states.