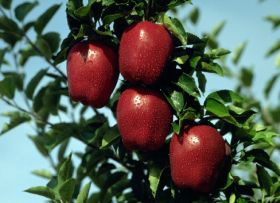 Postharvest solutions provider Decco has signed a deal with Agrauxine for the exclusive distribution of the Nexy bio-fungicide, an effective treatment for the control of key plant pathogens in apples and pears, citrus and bananas.

Nexy is a yeast originally isolated from the skin of the Golden Delicious apple, which naturally protects the fruit from pathogenic fungi such as Penicillium spp., Botrytis spp., Colletotrichum spp. and other organisms that cause rot.

The biological product acts mainly by competing for nutrients with pathogens, as well as pre-colonising the superficial wounds of plants.

Decco described Nexy as an ideal complement to its sustainable biological solutions that can reduce waste and cut food loss.

“It is a perfect fit for Decco’s organic and zero residue programmes, making nature-protected fruits and vegetables available to the consumer on the market,” the company said.

The European Commission and Environmental Protection Agency in the US have granted the necessary regulatory approval, including a residue tolerance exemption, confirming Nexy as safe for human health and respectful of the environment. It has also been granted approval for use in organic cultivation in the US and Europe.

Decco said many of the major US Pacific Northwest apple and pear fruit and vegetable plants had already signed up for Nexy applications using its novel application system, allowing them to significantly reduce losses due to rot during storage and transportation.

“Decco firmly believes that this partnership with Agrauxine is a critical link for an innovative developer and provider of biological solutions for crop protection, especially considering Lesaffre's long tradition of fermentation-based products,” said Francisco Rodriguez, president and CEO of Decco.

Agrauxine said Nexy was poised to become the new standard for postharvest solutions that responds to the growing consumer demand for fruit with fewer residues.

“With its leadership in the target markets and its experienced teams, Decco is a fantastic partner in making Nexy a leading technology globally,” said Agrauxine CEO Hugo Bony.

Decco said it expects to launch Nexy commercially throughout Europe (except France) and in Canada, Africa, Asia, Australia and New Zealand, Chile, Argentina, Brazil as well as other Latin American countries in the coming years as registrations are granted.