Thanks to state support for the Egyptian sector, investments are increasing in agricultural projects, putting suppliers in a strong position 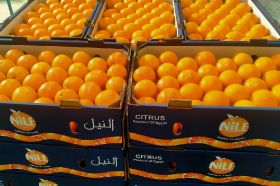 Egypt's agricultural exports have performed well in the past few months, according to Ahmed Ghazy, marketing manager at citrus giant Nile Establishment For International Trade, despite the current economic pressures and lockdowns in dozens of countries due to the Covid-19 crisis.

For Ghazy, the Egyptian government has played an important role in supporting the agriculture sector throughout the pandemic, including citrus.

Other than reclamation and greenhouse projects, support has apparently been provided for the development of irrigation and extension systems, production, supply chains, and industrial and processing activities.

“This has contributed strongly to providing a stable base for the stability and preservation of Egyptian agriculture,” said Ghazy. “Our exports have not been disrupted over the past months. Rather, we have witnessed high demand, and millions of tonnes have poured into dozens of markets, achieving huge returns for investors and broad benefits to the state through the dollar portfolio, adjusting the trade balance and other economic indicators.”

Ghazy said that recent growth was revitalising the sector, attracting investments and seeing the establishment of new projects, as investors seek to take advantage of opportunities in the sector and Egypt’s comparative advantages.

“The state's support for investment and development in this field means that the sector may witness further expansion,” he said, “in employment, production, exports and supplies to the local market. The market for fruit and vegetables in Egypt is expected to register a CAGR of 4.2 per cent during the forecast period of 2021-2026."