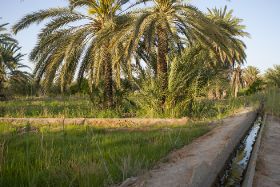 SanLucar has been awarded the National Prize for Social Commitment by the President of Tunisia for a second time in recognition of its social efforts at its tomato farm, La Cinquième Saison, which it set up in the south of the country in 2009.

SanLucar said it highlighted the importance it placed not only on offering premium fruit and vegetables, but also in supporting employees and the local community.

The company is particularly active in the Gabès region and invests in sustainable projects in the oasis village of El Hamma.

“The award is also a special recognition for the efforts and development of a constructive approach in the management of labour relations,” SanLucar said.

“Our corporate philosophy ‘Taste in harmony with people and nature’ has been reflected in our international implementation and support of social, educational and environmental projects since our foundation.“

Since 2016, SanLucar has been working with the Tunisian Ministry of Education to improve the learning conditions of children in rural areas. Within three years, a total of seven schools in the Gabès region were renovated.

For several years now, the company has been committed to education, including the training of young people.

SanLucar said it is equally committed to environmental causes, particularly with regard to water, which is such a precious resource in the North African country.

The company employs drainage channels at its tomato farm, allowing water that is not absorbed by the plants to be collected, treated and used for the next irrigation. In this way, 30 per cent of the water is recycled and saved.

In 2019, SanLucar received the Hannon Award in Paris in recognition of its continuous efforts to improve the working and living conditions of its employees and promoting co-development through responsible investment.

The recent award from the President of Tunisia also includes prize money of 10,000 dinars, which will be invested in equipping the neighbouring hospital in El Hamma with oxygen machines.