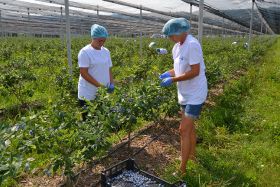 Blueberry harvesting at Berry 4 U

Blueberry production in Serbia has been greatly expanding in recent years, with the area in Serbia now standing at approximately 2,500ha, according to Julka Toskic, CEO of marketing agency AgroBrand.

Serbia’s new generation of blueberry producers are using state-of-the-art technology, she says, leading to improvements in calibration, sorting and packaging, while farm sizes are larger. As young orchards mature and reach full capacity, Serbian exports of fresh blueberries are growing rapidly, and new state-of-the-art coldstores and distribution centres can be found across the country.

“Some of the most successful Serbian fresh blueberry exporters are the members of the recently established platform, Serbia Does Fruit,” says Toskic. “The platform was established with the aim of international promotion of the Serbian fruit industry and represents an effective connection between advanced, certified domestic suppliers and international buyers.”

The season started well for blueberry producers, since in Serbia blueberries are harvested at least two weeks earlier than many of its competitors, says Toskic. In June alone, almost 1,700 tonnes of blueberries were exported to a dozen export markets, including the Netherlands, Germany, the UK and Russia.

“Not only have we increased our blueberry plantations, but we have also increased cooperation with individual producers,” says Ana Bosnjak, managing director of Agro Bel System.

Although the season is still ongoing, Agro Bel System is already in negotiations with buyers from Scandinavia concerning the 2022 season.

“We have increased the quantity and type of packaging in which we export blueberries,” says Bosnjak, “and by next season we are also going to increase the current blueberry warehouse and sorting capacities.”

“For our company this was a great season,” adds Sladjana Vukovic, director of Srbovoce, “during which we realised 150 tonnes of blueberry exports, which is three times more than last season. Our total production has been exported to the UK market and we already have a large number of inquiries from new UK customers for next season. Next year, besides blueberries in bulk, we are also preparing small packs of blueberries in accordance with our customers’ requests.”

“This year, besides Germany, the Netherlands and Russia, our blueberries also arrived in Dubai,” says Goran Stajic, director of Berry 4 U. “We pay special attention to the modernisation and application of advanced technologies. The quality and preservation of the freshness and nutritional values of the product are our first priority. Therefore, we have state-of-the-art WECO sorting equipment, a tailored cooling system, a packing centre and a state-of-the-art warehouse.”