WUWM has called for immediate action to transform our food systems, stressing the important sustainability role of wholesale markets 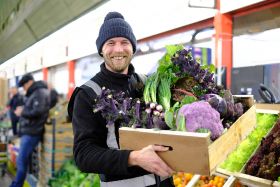 The World Union of Wholesale Markets (WUWM) has signed the Glasgow Food and Climate Declaration in support of the COP26 goals and "concrete actions to achieve planetary health".

According to WUWM, the transition to a sustainable food system is an "essential element to fight against climate change" and mitigate its impact.

"WUWM truly supports the COP26 goals and efforts," it stated, "and strongly believes that the transformation of food systems should be at the core of COP26 discussions." WUWM pointed to an FAO estimate that food accounts for more than 26 per cent of worldwide greenhouse emissions. "We must act now," it urged, "and change the way we think, produce, distribute and consume food."

"That is why WUWM is glad to announce that we have signed the 'Glasgow Food and Climate Declaration' along with more than 80 actors related to food policy, such as worldwide recognised institutions like the FAO, the Global Alliance for Improved Nutrition (GAIN), the Local Governments for Sustainability (ICLEI), C40 Cities and major cities, regions, territories, federal states and provinces around the world," a statement read.

According to WUWM, the Declaration acknowledges the importance of addressing the food sector in its entirety, promoting a farm-to-fork approach that involves every stakeholder, and recognises the need to foster the role of cities and regions in the development of urban food policies.

"In a world where 75 per cent of the population is expected to live in cities by 2050, securing fresh food supply will be one of the principal challenges that our food systems will face in the short, medium and long-term," it stated.

"For this reason, we believe that wholesale markets are the most precious operational allies of national and local governments to ensure more equal access of farmers to the market and more availability of a large diversity of fresh and economically accessible fresh food to urban citizens," WUWM said.