Bad weather and high volumes adversely affected vegetable prices in Belgium in 2008, but brand recognition is on the rise 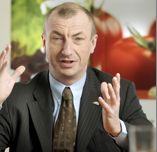 2008 was a mixed year for Belgian fresh produce, with overall turnover down due to a lower average price of particular vegetables. According to Maarten De Moor, executive director of LAVA, the umbrella cooperative association of Flandria auctions, a combination of adverse weather conditions and increased supply in Europe was the cause.

“For some types of produce it was a good year, while for others it was a bad year because prices were low,” said Mr De Moor. “Glasshouse vegetables didn’t do too well in 2008. The poor summer reduced demand for summer vegetables and this pushed down prices. Vine tomatoes held up well, but sales of loose tomatoes weren’t so good. Sales of sweet peppers were only moderate and it was a decidedly bad season for cucumbers."

Despite some disappointing results, consumer research has shown that brand awareness of Flandria among Belgian consumers increased markedly in 2008, with six out of ten consumers now familiar with the name.

“When we launched the various consumer campaigns a few years ago it was indeed our goal to increase brand awareness of Flandria among consumers,” said Mr De Moor. “Promotional campaigns and cooking demonstrations really pay off. Brand awareness of Flandria has in fact been increasing year on year. This is why 2009 will see us continuing with the same strategy. Here in Belgium the focus will be on communicating via the media, complemented with direct contact with consumers, which is equally essential for us. Activities such as in-store cooking demonstrations and presence at public fairs should help to ensure that the name Flandria conjures up an image among consumers of fresh, top-quality and reliable produce.”