For the fourth year running, international apple marketer Enza is lending its support to the Jazz Apple Cycling team, with both groups expecting a positive season ahead 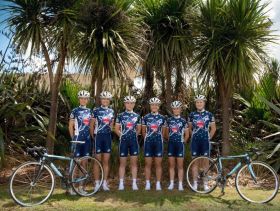 The marketing team behind apple variety Jazz has once again teamed up with New Zealand’s first and only international professional cycling team, known collectively as Jazz Apple Cycling, in order to sponsor the group’s various competitive exploits during the course of the coming year.

Towards the end of February, the six-strong came together in the centre of Auckland to preview the 2009 season and unveil a new-look uniform. Led and managed by former Olympian Susy Pryde, the team is represented by riders from New Zealand, the US, Canada and Australia, all of whom had been training at a camp in Matakana, just north of Auckland, prior to racing in the NZ Womens Tour of New Zealand and the World Cup Road Race around Masterton on 25-28 February.

Campbell Naish, Jazz Apple brand manager at Enza International, which controls the exclusive rights to market the Jazz variety worldwide, told those attending the launch that all of the members of Jazz Apple Cycling and in particular Ms Pryde, who has pioneered the team from its inception, were fantastic ambassadors for the company’s flagship apple.

“Each rider is a world-class athlete able to challenge the best riders in the world,” he commented. “They are multi-dimensional individuals who reflect the values represented by Jazz apples. Enza is thrilled to have been with the team since its inception.”

Now in its fourth year, the Jazz Apple Cycling team has risen from a development team to become a globally recognised force in professional cycling. What’s more, the team has achieved this primarily with support from its New Zealand sponsors, headed up by Jazz Apples.

This year the team will ride in New Zealand, Australia, and Asia, but the primary focus of the campaign will be North America, where the team will take on the best professional riders over a four-month season lasting from April to August.

According to Ms Pryde, the team is expected to produce a strong display on this year’s tour. Dotsie Bauer is a double national champion in the US, Steph Roorder is a Canadian national champion, Rosara Josephs and Mr Pryde herself are both Olympians and Lauren Ellis won her first world cup race this year. Ruth Corset, meanwhile, dominated the North American cycling scene last year and the sixth team member, Malindi Maclean, recently won the New Zealand Criterium championship. As a result, the team is believed to be even stronger this year than the team that ran a very successful North American campaign during 2008.

February's launch, which was the first time the team had been able to gather its riders from around the world in New Zealand prior to the season, was attended by luminaries of the sport such as Gavin Stevens and Ian Richards, both Commonwealth Games gold medallists on the bike, as well as John Harrison, another New Zealander who, like Ms Pryde, built up a professional road cycling team from scratch in North America.

Enza’s advertising campaigns in Europe are also focusing on sports in order to raise the profile of Jazz. In the UK, after months of scouring the country searching for Britain’s top sporting talents, the first ten members of Team Jazz have now been selected.

The successful ten are made up of an eclectic mix of athletes including a snowboarder, a rower, a basketball player, two cyclists, a beach volleyball international, a fearless climber, a Tae Kwon-Do expert, a javelin thrower and a sailboat racer. The lucky ten have each received £1,000 (€1,077) in order to help them in their pursuit of sporting glory as well as kit and a publicity campaign.

Meanwhile, at the first ever International Jazz Day held in Berlin the day before Fruit Logistica, growers, marketers and advisors involved in producing and selling Jazz came together to discuss the progress made so far with the variety and plans for its future development.

Tony Fisette, managing director of Belgium-based Enzafruit Continent, told journalists: “It continues to be a privilege to market an apple that has retained record price levels even in tough economic conditions. Jazz gives major retailers confidence that they can secure premium margins with minimum shrinkage. Jazz is a strong, stable apple with a wonderful tangy-sweet taste that consumers love.”

Enza International is part of the Turners & Growers Group of Companies, with offices in Auckland, Hastings, Nelson and Dunedin in New Zealand as well as representatives in North America, Europe and Asia. A key supplier to 22 of the world’s top 25 retailers, Enza has sought to build a reputation as an innovation leader in terms of apple development, with Jazz now being closely followed by another trademarked variety, Envy.