Pakistan mango exports ‘may be hit’ 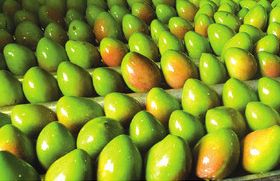 Pakistan’s mango exports to Europe could fall by as much as 50 per cent this year as a result of “extremely high” airfreight charges, according to a leading exporter.

The claim comes in spite of an optimistic seasonal forecast from the country’s mango sector, which said it hoped to increase exports to as much as 150,000 tonnes ahead of an expected harvest totaling between 1.8m and 2m tonnes.

Mr Wahid argued that the attitude of the airline could harm the chances of Pakistan’s mango sector in European market, claiming that as a result of the high charges mango exports had fallen by 45 per cent last year to 70,000 tonnes from 125,000 tonnes in 2007.

However, despite the airfreight costs the newspaper reported that Pakistan’s mango exporters hoped to export between 130,000 and 150,000 tonnes of fruit this season, thanks to the expected high harvest.