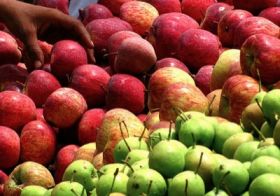 This year's EU apple crop is expected to be the second lowest in the past 15 years, according to new forecasts revealed at the annual Prognosfruit meeting, being held this year in Kiev, Ukraine.

According to the forecast, made by Helwig Schwartau of Agricultural Market Information (AMI), total apple production across the EU will be around 9.8m tonnes, down on the 11m-tonne crop harvested in 2009.

For pears, meanwhile, forecasts also unveiled by AMI in Kiev suggest production will be at their lowest for 20 years, falling to an estimated 2.16m tonnes in 2010/11.

Poor weather during the European spring have been cited as the main reason for the forecast downturn in volumes.

Further details on the Prognosfruit forecasts will appear on this website and in the September issue of Eurofruit Magazine.

More details will be published in the September issue of Eurofruit Magazine. To reserve your copy, please contact: