New Sun Black variety said to offer the nutritional content of several fruits, including a higher level of anti-oxidants 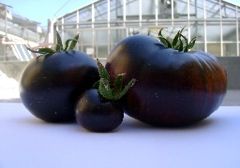 A new variety of black-skinned tomato which contains a high volume of anthocyanins, the same pigment found in blueberries, blackberries and black grapes, has been developed by scientists in Italy.

Known as Sun Black, the variety has a dark black skin and red flesh. According to its developers, it maintains its flavour and, by virtue of its high nutrient content, also offers health benefits to consumers.

The tomato is a product of the Tom-Anto initiative, an inter-university project financed by the Italian government and coordinated by Professor Pierdomenico Perata of the Sant'Anna School of Advanced Studies in Pisa. Italy's Universities Ministry is understood to have pumped some €150m into the research.

According to its developers, the Sun Black tomato brings together in a single product the nutritional content of several fruits. "The idea was to combine in a single product a higher level of anthocyanins, which have anti-oxidant properties," said a spokesperson. "These are usually absent in tomatoes."

The black-skinned tomato, now in its second year of production, was obtained by natural means by crossing a number of tomato varieties with contrasting attributes.

Plans are now being developed to begin producing the Sun Black variety on a commercial scale.