Counterfeits found in increasing amounts across the UK, so Thames Valley Police are trying to make it stop 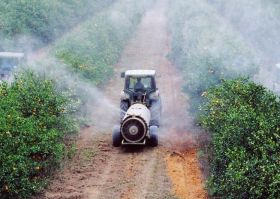 The distribution and use of illegal pesticides, including counterfeits, across Oxfordshire, Buckinghamshire and Berkshire, is being investigated.

Illegal pesticides have been found in increasing amounts across the UK and Europe, and Thames Valley Police have a particular interest in illegal pesticides, not just because of the risks they pose to the rural communities, but due to the links to organised crime gangs.

There is growing evidence that the illicit activities of such gangs finance other serious crimes such as human trafficking and international terrorism.

“We are working closely with the industry which is providing farmers and growers with advice to minimise the risks of buying and using illegal pesticides through the nationwide ‘Watch Out’ campaign.

“The campaign is also being supported by research conducted by Harper Adams University into the threat posed to UK agriculture by counterfeit pesticides.

“This type of crime is very difficult to identify and spot happening and receiving intelligence will be a vital part of our investigation, which is where members of the public and more importantly, members of the rural and farming community and pesticide industry will come in.

“Please be on the lookout for anything suspicious, or unusual about any pesticide product you have either been offered or which you have bought and call our 101 to report it, quoting Operation Silo.”

Dr Richard Byrne, senior lecturer in the land, farm and agribusiness management department at Harper Adams University, said: “We are delighted to be working with industry and police partners in this important area of rural crime, as it poses a serious risk to the reputation of British agriculture."

And John Claxton, from the Health and Safety Executive, said: “HSE is pleased to support the initiative by Thames Valley Police.

“Europol published a report in 2011 stating ten per cent of pesticides used across Europe were counterfeit. Current research suggests a more accurate figure is now 15 per cent.

“Counterfeit pesticides, usually imported from China, are not approved for use in the UK or Europe. They present unknown and unquantifiable risks to the safety of the food chain, the environment, professional users and consumers.”