Desmond Tutu: US public in for a treat 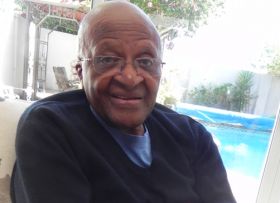 The first South African sharon fruit destined for the US market will leave South Africa within the next two weeks following the announcement that the US has opened its doors to the fruit.

Sources in South Africa say the move will increase marketing opportunities for the country's growers and bring new impetus to production of the fruit.

Since the industry was established in South Africa towards the end of the 1990s, it mainly had to rely on the European, Canadian, Middle East and Far East markets.

Sharon fruit, a variety of persimmon, is marketed worldwide by Israel's Mor International, the group responsible for starting the South African business.

The first person to congratulate the industry on this significant development was Archbishop Desmond Tutu, who also received his customary first sharon fruit of the new season at his home in Cape Town earlier this week (see photo). He had a message for US consumers: "This is truly fantastic news and judging from the sweet and juicy fruit we tasted this morning, the American consumers can make themselves ready a special treat.

"This is the best from our country, please try it and then come over here and join us for a full meal of our very special South African products," said the Archbishop.

He tasted the first fruit of the season along with his wife Leah Tutu and a few friends, and all agreed that it was juicy and sweet, something that will suit the American palate.

Entrance to the US follows an agreement that South African sharon fruit will be irradiated in the US, because there are no facilities available in South Africa to carry out the process on the required scale.

South African sharon fruit is also expected to benefit from the AGOA Treaty, which the US government introduced in 2000 to support the development of agriculture in Africa and to create export opportunities for South African exporters.

The fruit is expected to fill a niche in the US market at the end of the Northern Hemisphere marketing season. "It offers us the opportunity to offer our fruit to the US trade and consumers during the months of May to July, which is prolonging our season,” said Mor diector Meir Ben-Artzy.

"It will create a more evenly balanced supply and demand situation in all our markets and will also stimulate growth in production in South Africa.”

Pine Pienaar, project leader of Sharon Fruit in South Africa, added: “While we are very pleased with this development, it will take some time to build a sustainable supply programme because there are still some operational issues to be sorted out."

The South African fruit will be shipped in containers to Newark on the East Coast of the US and will be transported from there to New Orleans to be irradiated. Thereafter it will be delivered to customers.

The marketing of the fruit will be handled by Mor’s office in New York.