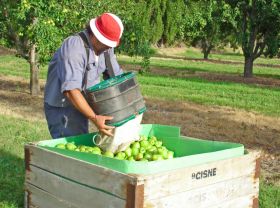 Fruit producers in Río Negro and Neuquén have condemned a decision by packhouse workers’ union SOEFRNYN to go out on strike over an ongoing dispute about pay and conditions.

The Federation of Fruit Producers of Río Negro and Neuquén said SOEFRNYN’s actions posed a serious threat to rural jobs as harvesters were unable to pick fruit as coldstores are already operating at full capacity.

“It is not SOEFRNYN’s pay demands that we take issue with but rather the union’s methods which go against the legal requirement for binding arbitration to enable work to continue during a dispute,” a spokesperson for the federation said. “In a democracy everyone should abide by the rules and we call upon the government and judiciary to enforce the law as it stands.”

Ariel Sabbag of Emelka told Fruitnet that producers who owned their own coldstorage facilities had been able to get their fruit into storage but smaller growers had been particularly badly affected. "The situation has been compounded by this year's late harvest as it makes our export window even narrower," he noted.

The Argentine Chamber of Integrated Fruit Producers (Cafi) issued a statement denouncing the walkout as “incomprehensible”, adding that it put the entire 2015 apple and pear harvest in jeopardy.

“Every hour that passes without growers being able to pack the fruit inflicts serious financial losses to the sector and causes irreversible damage to society itself through job losses, falling tax revenues and production losses,” Cafi said.

The walkout is the latest setback for Argentina's topfruit industry in what is proving to be a highly challenging season. The devaluation of the rouble, and to a lesser extent the euro, coupled with higher Northern Hemisphere stocks is set to take its toll on demand in the coming weeks.

Ahtough production in Argentina is back on track after the 2013 freeze, hopes of capitalising on Russia’s veto on EU agricultural products have nosedived along with the troubled rouble. At the end of last year, Marcelo Loyarte of the Argentine Chamber of Integrated Fruit Producers (Cafi) warned that Russia’s worsening economic situation will have serious repercussions for producers in Rio Negro, which ships around 90,000 tonnes of apples and pears to Russia a year.

Sabbag said Southern Hemisphere shippers are facing a complex and highly volatile season. “We have gone from euphoria to uncertainty and the situation is changing almost constantly,” he stated. “There’s going to be a significant fall in shipments to Russia and the EU in 2015 and it’s not yet clear where the excess volumes are going to go.”