Together with the residual effects from the 2013 freeze and currency devaluations in Europe and Russia, 2015 is set to be a challenging year 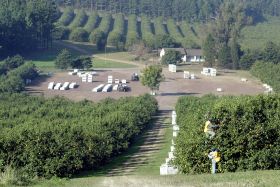 Heavy rains and hailstorms are threatening to derail the start of the 2015 lemon season in the Argentine region of Tucumán. A representative from the Obispo Colombres Agroindustrial Experimental Station (EEAOC) told La Gaceta Tucumán that in addition to the possible direct impact of the hail on the quality and quantity of this year’s citrus crop, the higher-than-average precipitation levels meant production would be more susceptible to disease, particularly in central and southern areas.

“For this reason, the losses are more likely to be reflected in terms of damage to fruit quality rather than the overall crop volume,” the station said. “We urge producers to be extra vigilant when it comes to the application of fungicides.”

EEAOC noted that access routes to farms were also being hampered with the delays to harvesting likely to result in oversized fruit and deteriorating quality. It said a number of farms had also been damaged by rivers overflowing their banks and depositing mud and stilt in groves.

The 2015 Argentine lemon crop is already expected to be 15-20 per lighter than in a normal year due to the lasting effects of the 2013 freeze. According to All Lemon, the quality seal for exported lemons from Argentina, trees have yet to recover biologically from the worst frosts the region has seen in 50 years, which were followed by a period of drought in spring 2013/summer 2014 resulting in a 60 per cent fall in output last year. Together with the recent devaluation of the euro and rouble, the industry is braced for what is set to be yet another challenging export season.

“It is precisely at times like these that you have to be more creative and even more proactive in order to maintain the position of leadership that All Lemon has achieved,” the association’s president Romain Corneille said last month. “We insist on sticking to the same formula that has always been effective for us and that is to work tirelessly on the quality of our control processes.”