Chiquita reveals it made a US$62.5m loss in 2014, mainly due to the costs it incurred trying to merge with Fyffes 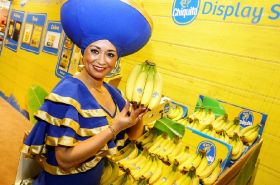 Chiquita Brands International has revealed that it made a US$62.5m net loss in 2014, largely as a result of the US$51m it spent pursuing its failed merger with Irish competitor Fyffes and then making necessary arrangements for its subsequent purchase by Brazilian consortium Cutrale-Safra.

Much of that outlay came in the form of an approximately US$23m payment given to Fyffes as compensation for terminating its original merger proposal.

The results, which were made public in a document submitted to the US Securities and Exchange Commission, do show improvement in Chiquita’s overall profitability if those transaction costs are discounted as one-off payments. The group made a net loss of US$15.8m in 2013 and US$405m the year before.

Chiquita attributed the improvement primarily to its salads and healthy snacks division, which managed to cut its costs by US$37m and therefore cope with a US$24m downturn in sales compared with 2013.

“Our new Midwest salad plant continued to meet its performance targets in 2014, more than recovering the US$18m in transition costs that were incurred in 2013,” the group said.

“Our Salads and Healthy Snacks segment results also reflected packaging efficiency and pricing actions that took effect in July 2014, resulting in increased retail value-added salad pricing inclusive of product mix; these changes returned the segment's products to an appropriate level of profitability and allowed the segment to recover from unusually harsh winter weather in the first quarter of 2014 that affected logistics and demand for our products, particularly in foodservice.”

In its bananas business, Chiquita’s 2014 operating income was also marginally better than in 2013, with sales and costs moving up more or less in tandem.

Sales at Fresh Express and the rest of its salads and healthy snacks business fell slightly on the 2013 figure to US$943m, while sales of its other fresh produce lines – including avocados and table grapes – were up 4.7 per cent to US$127m.

Referring mainly to its decision to exit a joint venture in Europe with Danone, Chiquita underlined its commitment to focusing on its core business areas.

“We have taken a number of steps to reduce risk and improve operating efficiencies in our core businesses as we executed our return to the core strategy,” the group continued. “We exited several non-core healthy snacking businesses that generated operating losses and distracted management from its core businesses of bananas and salads, and we redirected that investment back to the core.”