Uruguay has been working intensively to contain the disease, implementing a wide reaching action plan in 2015 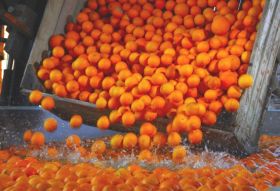 A plant health delegation from the European Union is to travel to Uruguay in April to evaluate the progress made by the citrus industry in combating citrus black spot before deciding whether exports to the EU should be allowed to continue.

Shipments to the EU fell sharply in 2015 after heavy rainfall during the spring of 2014 resulted in a high incidence of the disease and seriously affected fruit quality.

Figures from the Ministry of Agriculture, Livestock and Fisheries (MGAP) show that exports ended the year down 27.3 per cent at 98,000 tonnes, in spite of production rising by 6 per cent to 306,000 tonnes.

Since the second half of 2015 the industry has been working intensively to contain the disease, implementing a wide reaching action plan that includes new monitoring and treatments methods and better traceability and documentation.

Citrus black spot, or Guignardia citricarpa, is a fungal disease characterised by dark, speckled spots or blotches on the rinds of the fruit. As one of the most devastating fungal diseases of citrus worldwide, it causes early fruit drop, reduces crop yield and leaves the highly blemished fruit unsuitable for sale.

The EU takes more than 45 per cent of Uruguay’s total citrus export volume, making it the biggest market ahead of the US on 24 per cent. Shipments to the US rose considerably in 2015, reaching 14,800 tonnes, and the market is set to become increasingly important as demand for summer citrus grows.

The past three years has seen a rise in new plantings of seedless varieties such as Murcott, Tango, Orr and Orri in response to strong demand from US consumers.

According to Marta Bentancur of the Union of Fruit Growers and Exporters of Uruguay (Upefruy), a key part of its attraction is that citrus can be shipped tariff-free, whereas exports to the EU are subject to a tariff of 16 per cent.

“At present we face an unequal playing field in Europe but Uruguay has built up a strong reputation as a supplier of good quality fruit and our intention is not to lose market share in the EU in favour of the US but to increase our overall export volume,” Bentancur said.

She added that access to the EU would likely improve once negotiations between the EU and Mercosur are finalised.