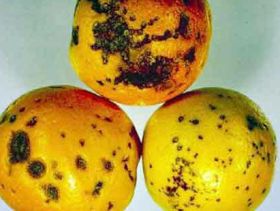 Copa-Cogeca has hit out at a new EU Commission proposal which, its says, "severely weakens" import controls to prevent black spot disease (CBS) in citrus fruit coming into Europe, warning that the proposals are "unacceptable".

The organisation said that the proposals were "totally unacceptable" given that over 100 cases of the highly contagious diseases had been detected at borders.

The proposal is being debated by the EU Standing Committee in Brussels. Copa-Cogeca pointed out that figures showed as many as 70 cases had been detected from Uruguay, 15 from South Africa, 17 from Argentina and 13 from Brazil.

"This far exceeds the EU Commissions permissible limit of five fixed by the EU Food Safety Authority (EFSA) as set out in EC Decision 2014/422," the group noted.

Copa-Cogeca secretary general Pekka Pesonen warned: “We urge Member States to reject this proposal outright on three accounts. First it proposes letting contaminated citrus fruit from entering the EU for use in processing. Secondly, the Commission has proposed to delete its decision vis a vis ensuring that controls are stepped up after the sixth interception in the same year, despite advice from EFSA. Thirdly, implementation of safeguard measures for Uruguay will start only from 1st January 2017 when 70 cases were already intercepted at borders from Uruguay in 2015.

“Unless the EU Commission puts in place tough measures to prevent the spread of the contagious disease, there is a real risk it will enter the EU," he continued. "This is unacceptable given that CBS is a disease that is not present in Europe and its presence could have serious consequences on the citrus sector in producer countries.

"The EU citrus fruit sector is crucial both from an economic and social point of view," Pesonen added. "It provides the EU with high quality produce, at the same time as ensuring employment for millions of people in EU rural areas, both upstream and downstream, especially in southern countries. It puts at stake 600,000ha and 5000,000 tonnes of produce. We cannot take the risk of importing the disease. The impact would be disastrous for EU citrus fruit producers. The proposals must be revised."