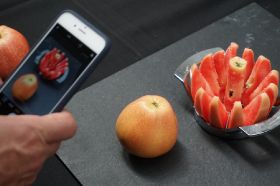 The commercial launch of three red-fleshed apple varieties has taken place at Fruit Attraction in Madrid.

The as-yet unnamed varieties are grown and marketed by Ifored, an alliance of 14 leading apple companies from 13 different countries, and said to offer superior taste and a unique appearance capable of attracting consumers all over the world.

A bespoke marketing campaign currently in development will be announced in due course, with a brand expected to be applied to the entire range instead of the individual varieties.

The varieties themselves were developed by French company International Fruit Obtention, which selected the trio (one with yellow skin, one with orange skin and one with deep red skin) from a wide range of third- and fourth-generation red-fleshed varieties bred during more than 20 years of research.

These are entirely GMO-free the result of natural cross-breeding of wild, red-flesh cultivars and conventional eating apples.

Following the project launch in 2012, the varieties furthest ahead in their development were planted in pilot orchards by Ifored partners and underwent commercial assessment, with pre-commercial orchards planted in Europe during the spring of 2016.

The first in-market tests are scheduled for next autumn, followed by commercial plantings from 2018.

He also revealed: ”As well as the three presented today, there are more cultivars already in the advanced test phase, so we can keep marketing exciting new apples to delight consumers in the future."

Ifored members are expected to handle production and marketing of the new varieties in their respective markets.

At present, total potential output is estimated at 3m tonnes from 55,000ha across 13 countries.
The new red-fleshed apple varieties launched this week are described by Ifored as follows:

R201
“It has an intense red skin with prominent lenticles, a bright red flesh and a fully flavoured taste with notes of berry. The harvest period is similar to Braeburn.”

Y101
“It has a very attractive orange skin with yellow lenticles and a pink-red flesh. The texture is firm and juicy, while the taste balances good sugar and acidity levels. The harvest period is at the end of Gala.”

Y102
“It is harvested after the Golden Delicious variety. Its skin is yellow with prominent lenticles, the flesh is pink. It has a very nice eating quality and good storage ability.”