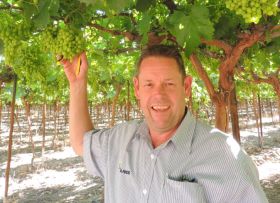 The first southern African table grape shipments from Namibia and the Orange River arrived in the port of Cape Town this weekend (12 November), and are due in the UK and Europe within two weeks - while harvesting in the Northern region is already well underway.

Producers in Namibia’s Aussenkehr regions started packing last week and were followed by growers in the lower end of the Orange River region.

Andre Vermaak from Silverlands Vineyards says early grape berry sizing is very good, and notes that Namibia will be on course to ship around 6m cartons this year.

“We are confident that we will enter a strong market in Europe because of the early clearing of competitive varieties,” he outlines.

In the Orange River, harvesting started at Klein Pella at the lower end of the production region last week. Kartsen Group’s Piet du Plessis confirms that that the early berry size on the South African side of the river is also good.

Meanwhile, SATI has released its first official crop estimate of the season, predicting a normal crop of between 61.1m and 63m cartons.

“The early production regions have started packing one week earlier than the previous season in the Northern Provinces region, where growers had a good start to the campaign,” the organisation said.

According to the statement, the Orange River region is expected to have a slower start, with early volumes slightly lower compared to the same period last year. “The region however foresees that a normal packout will continue after the slow start,” SATI confirmed.

Due to good rains during the winter months the Olifants River Region does not expect any water restrictions, as was the case during the 2015/16 season, and a normal crop is thus expected.

The two later regions of the Berg River and Hex River are experiencing reasonably good weather at this stage, although it is still too early to predict any future changes and how they may affect the crop.

“However, it is unclear what effect the exceptionally dry and warm weather of the previous season will have on the new crop,” SATI noted. “Furthermore the grip of the worst drought in decades seems to persist in some areas, which could also have an adverse impact on the crop.”

Willem Bestbier, chief executive of SATI, says that as of this year crop estimates are done in co-operation with industry experts who are in close contact with growers in all regions.

He says the best information will therefore be available this season: “This structure should also enable us to be more responsive to in-season developments and deviations,” he explained.