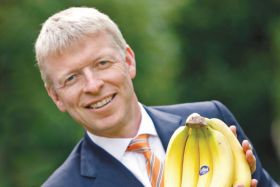 Commenting on the takeover David McCann of Fyffes said: "We believe this transaction represents a compelling proposition for our shareholders and crystallises the substantial value created in recent years through the various strategic developments and the strong operating performance of our group.

But the Sumitomo takeover is "no second league deal by comparison”, said Raymond. “It puts the newly combined firm on a solid platform for future growth and margin scalability," following on from the Irish company’s own acquisitions of Canadian mushroom giants Highline Produce and All Seasons Mushrooms earlier this year for $98m (£77.6m) and $41m (£32.5m) respectively.

Sumitomo’s managing executive officer Hirohiko Imura commented: "Sumitomo Corporation has long admired Fyffes for its outstanding track record and market leading position, and we are delighted that the Fyffes Directors have unanimously agreed to recommend our offer to shareholders. We believe that our offer represents a great reward for Fyffes' shareholders.

“We look forward to working with the Fyffes team to further develop the business over the longer-term and to expanding into new markets to better serve customers."