A post-Brexit trade deal with the US could weaken UK farming practices when it comes to pesticide usage, MRLs and GM labelling, opponents warn 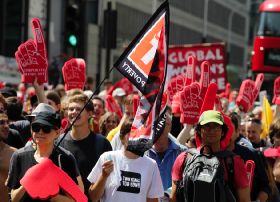 Following UK prime minister Theresa May’s recent meeting with new US president Donald Trump, speculation has been rife as to what a potential free trade deal between the US and a post-Brexit UK would entail.

Given the UK public’s earlier opposition to TTIP, the shelved trade deal between the US and the EU, one could expect the response from the UK farming sector to be cautious.

However, Martin Haworth, director of strategy at the UK’s National Farmers Union (NFU), merely stressed that British farmers should be able to use the same production techniques as their US counterparts in order to guarantee “an even playing field”, according to a report in the Guardian.

Critics have warned that lowering UK standards in order to harmonise with the US would risk jeopardising UK exporters’ access to their main market, the EU.

For example, a US-UK trade deal would open the door to US imports grown using  any of 82 pesticides currently banned in the EU but not in the US.

Meanwhile, fears exist that efforts would be made to relax the UK’s maximum residue levels for pesticides, which are currently set by the EU.

Finally, there are the differences between US and EU regulations on GM foods. In the UK, where no GM food is commercially grown, foods made using GM ingredients must be labelled as such; in the US, consumers are given no warning, forcing them to purchase organics if they wish to avoid GM.

Those fearful of GM’s impact on the environment, human health and prices warn that a US-UK trade deal could see GM labelling, as well as cultivation and import bans, condemned as discriminatory barriers to trade.