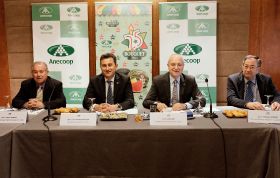 Presenting the results at its general assembly in Almería, the company said sales had increased by 10.7 per cent in value and 4.8 per cent in volume during 2015/16, reaching €639m and 782,000 tonnes respectively. Including Anecoop’s overseas divisions, overall sales reached €802m and 930,000 tonnes.

The figures reflect another year of solid growth for the group, which translated into improved returns for its 27,000 grower members.

Highlights of the past financial year included the incorporation of three new members – Toñifruit, Tomasol and Huercasa – and the creation of a new company, Janus Fruit, to handle Anecoop’s growing line of fresh-cut fruit.

This was also the first full year of operation of Solagora, Anecoop’s organics subsidiary. Although organics sales account for just 1.6 per cent of the group’s overall volume, sales increased by 4 per cent last year.

“During the past four decades, Anecoop has consolidated its business model to become a leader in the European fresh produce industry,” said the company’s president Alejandro Monzón.

“As a group we have evolved and adapted to changes to keep on growing, creating a commercial network that enables our grower members to send their products to 69 countries and be present on the market throughout the year.”

General director Joan Mir said the company hoped to continue growing during the next 40 years “to help support and develop a competitive and sustainable agriculture model that delivers optimum profitability to its grower members”.

The company said strong domestic sales and an increase in its fresh-cut offering had boosted vegetable sales, while in fruit, watermelon and kaki volumes had risen significantly in the past year.

In citrus, meanwhile, returns improved dramatically after five disastrous seasons. Although volume contracted by 10.6 per cent, prices were 19 per cent higher, with increases seen across virtually all varieties.