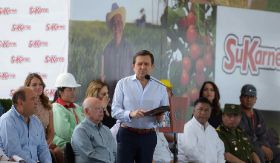 The Mexican government will widen access to goods and services from third countries under preferential tariffs while maintaining its current free trade arrangements with the US.

Setting out Mexico’s position ahead of the upcoming renegotiation of the North Atlantic Free Trade Agreement which are expected to begin in the second half of 2017, economy minister Ildefonso Guajardo insisted that the government would not seek to impose new trade barriers on US goods and services.

“There will be no imposition of tariffs,” Guajardo stated. “In its 20 years of free trade with the US, Mexico has made important progress in all sectors. We have achieved unprecedented exports of fruits, vegetables and other agro-industrial products and we have a very strong relationship.

“The idea is to continue strengthening this relationship and that means there is no thought of reinstating tariffs.”

At the same time, the government will seek to establish new trade deals with other international partners, said Guajardo.

This week the minister is due to meet with his Argentinean counterparts for talks of widening the Economic Complementation Agreement between the two countries.

“Agriculture forms a big part of Argentina’s interests and the same is true for Brazil,” Guajardo said. “Clearly, any discussions on boosting trade with these countries will therefore go hand in hand with increasing access for goods and services from these countries through preferential tariffs.”