A green light for the greenhouse

Growth in fresh vegetable consumption in Europe is speeding up. In the first of three special articles, we discuss how changes in the way western European consumers are shopping, preparing and eating vegetables offer greenhouse vegetable producers a chance to differentiate.

In recent years, growth in fresh vegetable consumption lagged behind population growth in the mature Western European market. But the tide is expected to turn for the fresh vegetable market as a whole. Consumers are becoming more health consciousness, plant-based foods are gaining popularity, and restaurants, schools, and hospitals are increasingly willing to put vegetables on the menu. Although consumers don’t always follow through on what they say, various consumer data are showing signs this change is real (see Figure 1). 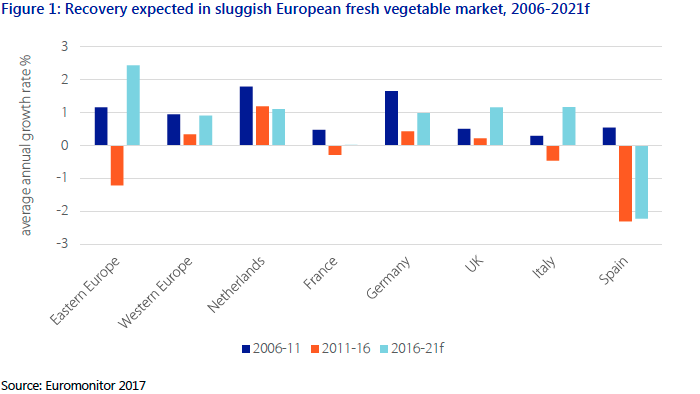 For tomatoes, peppers, and cucumbers, the main vegetables produced in greenhouses, the market outlook is mixed in terms of volume consumption. The continuation of recent trends in the UK and Germany points to steady market volume growth for peppers and slight growth for cucumbers (see Figure 2). For tomatoes, market volumes are on the decline, not only in the UK and Germany but in nearly all western European countries, with the exception of France. This decline is largely caused by a shift in consumption from large tomato types towards smaller varieties.

In reality, the market will not follow a straight line up or down. Future consumption will fluctuate according to unforeseen incidents, such as weather extremes, political issues and trends or hypes. An event like the Brexit may impact consumer demand for greenhouse vegetables if market access and import prices are affected. And heavy rainfall in Spain last winter has shown that weather events can actually result in empty supermarkets shelves for certain vegetables or price spikes that affect consumer purchases.

Shift from volume to value

In the coming decade, consumption value growth is likely to outpace consumption volume growth as has been showcased in the fresh tomato market (see Figure 3). This change is driven by a shift in consumer preferences towards food on-the-go and a larger emphasis on flavour, experiences, personalisation and sustainable production. Changes in the way shoppers buy groceries – buying less at mainstream supermarkets and more online and in convenience stores – may also drive up sales value rather than sales volume.

The increasing importance of snackability

Consumers love food that combines convenience, health, and flavour. Examples are ready-to-eat lunch salads and snack vegetables. In the Netherlands for example, snack tomatoes, which are mainly sold in 250g cups and 500g buckets, have already become the main tomato type in Dutch food retail’s tomato category, with a market (value) share of over 30 per cent ahead of the mainstream vine tomato and loose tomato. In Germany, sweet pointed peppers and small snack peppers have gained market share (see Figure 4). 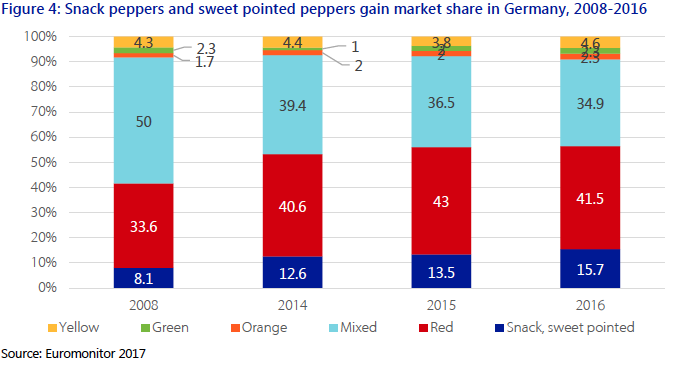 Telling and selling the story

The overall outlook for the fresh vegetable market is positive. European growers of greenhouse vegetables have the chance to take advantage of this trend for foods that are sustainable, organic, locally produced, superior tasting, snackable, and/or a substitute for meat. They have a story to tell and sell. In addition, there may be other niches worth exploring for cultivation in greenhouses or other protected environments, such as premium lettuce types, Asian vegetables, herbs, aromatics like saffron and vanilla, and crops for medical uses.

Growers of mainstream varieties of cucumbers, bell peppers, and tomatoes should be aware of persistently competitive markets. Producing at a low cost while meeting basic conditions like quality, safety, consistency and reliability of supply remains important for these fairly commoditised products.