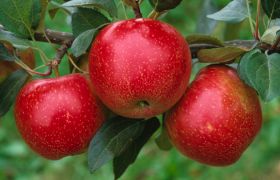 European producers and marketers of American apple brand SweeTango have joined forces to create a unified group based in the Swiss town of Langenthal.

This is an important milestone for the coordinated cultivation and marketing of the cultivar in Europe, the newly-formed company said.

Jürg Burri, Geiser Agro’s fruit division manager, has been appointed as the group’s coordinator, with responsibility for overseeing the successful introduction of the variety on the European market. Last year saw the first commercial harvest of SweeTango on the continent.

Geiser Agro’s chief executive Peter Bracher, who has been elected president of the SeeTango Europe Group, said: "We are excited about the merger of innovative European producers and marketers of SweeTango. This is an important step towards a successful future for the SweeTango brand in Europe.”

The variety, a cross between Honeycrisp and Zestar, was bred by David Bedford of the University of Minnesota in America. He was present at the cooperative's launch.